This half term, the already stretched resources at foodbanks were put under added strain to provide three days’ nutritionally balanced emergency food for the kids who are usually catered for through free school meals. When we heard that the government decided not to extend free school meals for children in England over the half-term holiday, Coach Jodie was quick to suggest Colchester Fitness Centre’s Bootcamp showed our support by making food donations…

… And the bootcampers stepped up! 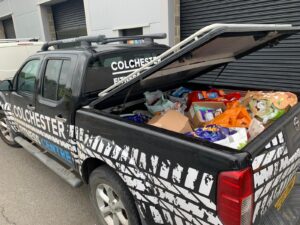 We collected over 230kgs of food at our sessions. When Coach Mark loaded the truck and dropped it off, the volunteers at Colchester foodbank did the maths, and worked out that bootcamp had donated 18 parcels of emergency food. They were really grateful, and confirmed that we fed a lot of kids!

No one should have to face going hungry

Over 90% of the food distributed by foodbanks is donated by the public. Colchester foodbank, working with Citizens UK, Colchester Citizens, and the Essex Food Poverty Alliance, is supported by The Trussell Trust, which runs the largest network of food banks in the UK. 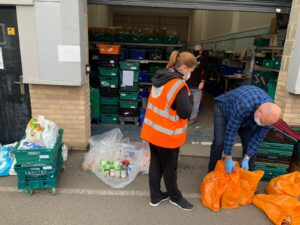 Fourteen million people live below the poverty line, and every day people in the UK go hungry for reasons ranging from redundancy to receiving an unexpected bill on a low income. A simple box of food makes a big difference, with foodbanks helping prevent crime, housing loss, family breakdown, and mental health problems. In the last year 1.9 million three-day emergency food supplies were distributed to people in crisis.

Doctors, health visitors, social workers, and other care professionals identify these people in need and issue them with a foodbank voucher. The voucher is then presented at a foodbank centre where it can be redeemed for three days’ emergency food.

Our ethos stresses a genuine culture of care and respect within a collaborative facility. And although that clearly extends through our members, our coaches, and anyone dropping in for a session, it goes far beyond our little community. Helping Colchester foodbank was a rewarding start to the long list of charitable work we’d like to do in the future.

Moved by David Attenborough’s Netflix documentary, Jodie has set herself a new challenge in raising funds for a charity he supports, Cool Earth.

Jodie’s dished out so many burpees in her fitness classes over the years, now it’s time for us to get our own back – and for a worthy cause, too! You can Donate Here